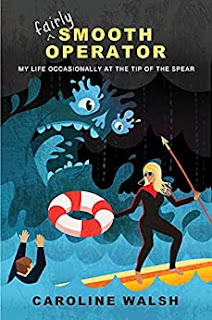 DISCLAIMER:  Like the author, I too enlisted in the U. S. Coast Guard as a Seaman Recruit (E-1), the lowest enlisted grade in the service.  Unlike the author, I progressed up the promotional ladder by “striking” for Yeoman in the field in lieu of being assigned to a Class A Service School.  Over time I was promoted to Chief Petty Officer, then to Chief Warrant Officer and then to a Lieutenant, a Limited Duty Officer (LDO).  I retired from the Coast Guard after twenty years as a Lieutenant on a permanent disability retirement.  More importantly, I entered the service in 1965 and retired in 1985. Why is this important?  Because there is a total disparity in my review given the differences in our ages and to some degree also in our educational background.  The author graduated from college; I attended only two years of college.  But the time frame is what’s so very important to understanding the following review.

I will not give the book a bad review because I actually enjoyed reading it.  I personally believe that there IS a difference between sexual abuse involving actual sexual advances and/or sexual relationships as compared to the the raw military humor based on the difference between the sexes.  The author seems to me to be writing more about the later as she describes her encounters during her time in the Coast Guard.  I do not doubt she experienced what she wrote about.  All I can say is that in my 20-year Coast Guard career, I did not see the type of treatment she received.  That may be the result of being a man as compared to being a woman.  Nor did I see or experience the type of failed leadership that she was exposed to.  I have no doubt about the leadership as she described it at Montauk Point Light Station but that is just one unit and represents only 25 of the over 35,000 Coast Guard men and women.  The book is well written and definitely holds your attention.  I would simply hate for any reader to assume that the entire Coast Guard was the picture image of how she described Montauk Point Light Station.

As for her time in the CIA, I found it fascinating that she encountered some of the same failed leadership traits in the CIA that she identified in the U. S. Coast Guard.  I fear that many readers who have little to no experience in military service or government service may draw conclusions about the two types of services as being typical of the entire U. S. Government.  In this regard, I do not concur in such a conclusion which is why I felt the need to qualify my comments by defining my service in the Coast Guard.

It may sound like I did not like the book which is not the case, I did enjoy reading it, otherwise I would not have taken the time to finished it.  There is a significant age difference between the author and me but more importantly, it was a total difference in the calendar years difference when we were both 20 something and joining the Coast Guard.  Different eras, different beliefs.  Acceptable behavior in the 1960s was not in the 2000s and visa versa.  It’s important for the reader of this review to understand this difference in ages and eras.

The author wrote about the single most valuable personal trait that anyone could possibly create for themselves.  Unfortunately, she did not put it into specific words such as:  Always do your best to make yourself indispensable regardless of the situations you may find yourself in.  That is exactly what she did without saying it.  She made the best of both good and bad situations throughout the book by becoming indispensable to the people she worked for, both good and bad.  With such an attitude, she will always land on her feet regardless of what may be happening.  That very lesson definitely makes the book worth reading.

Who should read the book?  I think anyone who reads it will benefit from the read.

Would I read it again?  No, there would be no need.

Would I give it as a gift?  Possibly, but to people who I believe would enjoy such a topic.