Nuggets For The Noggin
Coyotes and Tumbleweeds
By Jim “Gymbeaux” Brown, August 28, 2013 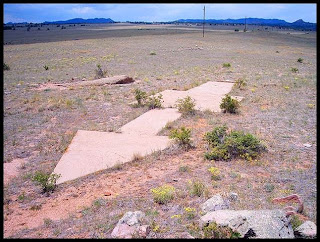 The following printed in italics was sent to me in an email so I have no idea who the author was to give due credit.  I had no idea these arrows existed.

There were no good aviation charts in those days, so pilots had to eyeball their way across the country using landmarks.  This meant that flying in bad weather was difficult, and night flying was just about impossible.

The Postal Service solved the problem with the world’s first ground-based civilian navigation system: a series of lit beacons that would extend from New York to San Francisco. Every ten miles, pilots would pass a bright yellow concrete arrow. Each arrow would be surmounted by a 51-foot steel tower and lit by a million-candlepower rotating beacon.  (A generator shed at the tail of each arrow powered the beacon.)

Now mail could get from the Atlantic to the Pacific not in a matter of weeks, but in just 30 hours or so.  Even the dumbest of air mail pilots, it seems, could follow a series of bright yellow arrows straight out of a Tex Avery cartoon. By 1924, just a year after Congress funded it, the line of giant concrete markers stretched from Rock Springs, Wyoming to Cleveland, Ohio. The next summer, it reached all the way to New York, and by 1929 it spanned the continent uninterrupted, the envy of postal systems worldwide.

Radio and radar are, of course, infinitely less cool than a concrete Yellow Brick Road from sea to shining sea, but I think we all know how this story ends. New advances in communication and navigation technology made the big arrows obsolete, and the Commerce Department decommissioned the beacons in the 1940s. The steel towers were torn down and went to the war effort.  But the hundreds of arrows remain. Their yellow paint is gone, their concrete cracks a little more with every winter frost, and no one crosses their path much, except for coyotes and tumbleweeds.

“…no one crosses their path much, except for coyotes and tumbleweeds.”  Think about that for a moment.  Anthony Robbins (www.TonyRobbins.com) has repeatedly said, “Success leaves clues!”  In the case of getting mail from one side of the country to another these clues were in the form of yellow concrete arrows or as the author said, “a Yellow Brick Road” from the Atlantic to the Pacific oceans.  But “no one crosses their path much (any more), except for coyotes and tumbleweeds.”

What would you consider a success in your lifetime?  Have you thought about it?  Would achieving your success be made easier if someone like the U. S. Post Office would leave you bright yellow, lighted concrete arrows to take you from point A to point B?

SURPRISE!  The U. S. Post Office may not have left you arrows to follow but as Robbins said, “success leaves clues” and fortunately for all of us, there are so many clues for us to follow that there is no viable excuse for not achieving the success you desire.

Instead of ARROWS the arrows are not BOOKS!

It’s been said by whom or what study I have no idea that fewer than 3% of Americans read one book or more a year.  Since you are reading this I would guess that you are in the 3% but there is no guarantee that is true.  I think it is important to make the difference between books of fiction and books of non-fiction.  While reading fiction is fun and interesting, the lessons learned from reading non-fiction books are far greater, at least in my opinion.

Have you read any good books lately?  Most people could not answer that question with anything other than a No; in fact most people, if the 3% is true would say they do not read a book at all let alone be it a “good” book.

So why would you attempt to travel the “Yellow Brick Road” to success alone and without help?  That is just stupid since someone has already traveled that road and left you with all kinds of “arrows” (clues) to follow.  The hardest part of the journey, because there are so many arrows to follow, is simply finding the “right” arrows for you.

The age of the personal computer has made the selection process even simpler for you; just Google your goal and then find the books on the subject matter that will eventually take you to where you want to go and beyond.

My biggest regret thus far in my life is that there was no one in my formative years that pointed me in the right direction.  I did not learn the value of reading until I was in my forties and even then it was by accident.  I had been hired for my first management position in the real estate industry.  Days before I was to begin, I found a cassette tape set created by Lee Shelton entitled Creating Teamwork http://tinyurl.com/p3nwlo8.  The tapes were fantastic!  I listened to them so many times that Lee said I could repeat them from memory and give the live presentations that he gave so many times.  I became friends with Lee by writing to him to thank him for the magnificent gift he gave me.

What was the gift?  As good as his tapes were, he suggested on the tapes to read I’m Okay; You’re Okay every 6 months.  Until that advice I had not read a book since I graduated high school some 25 or so years before.  I read the book, several times, and that one bit of advice cause me to start reading and collecting books, tapes and CDs to the point where I had over 1000 titles that I have read or listened to; some multiple times.  The books, tapes and CDs were like stepping stones where one led to another to another, etc.  They were like “bright yellow concrete arrows” forming a “yellow brick road” all leading me to this very point in my life where hopefully I am giving the same valuable advice that Lee Shelton gave me over 30 years ago and that is to READ!  And more importantly, KEEP READING!  Be a STUDENT FOREVER!

I think it is important to also point out that there is one characteristic that needs to be addressed FIRST!  ATTITUDE!  Without the proper attitude, success will continue to be a struggle for even the brightest student.  How do you develop your attitude?  Have you ever seen a course offered on attitudes?  Being aware of my attitude or lack thereof first happened when I read Jeffrey Gitomer’s (www.JeffreyGitomer.com) book, The Little Gold Book of YES!Attitude.  I must have read that book six times or more and listened to it on CD even more times (yes I also bought the book on CD).  I am sure the book contains nothing that you have not already heard from your mother but it assembles it all in one location.  Very easy to read and understand.  Implementing what Gitomer suggests is another story.  However, if you were to make a study of the book a habit, you cannot help but improve your attitude and subsequently your outlook on life.  Is it a coincidence that Gitomer’s book is “yellow” as are the arrows in the “yellow brick road?”  Maybe so; maybe not!

Posted by Jim "Gymbeaux" Brown at 2:15 PM No comments: