This past week I watch an interview conducted by Ann Vandersteel with Lieutenant Colonel Matthew Lohmeier on her evening internet news shows, www.steeltruth.com. (I would like to add that if you haven’t watched Steel Truth, you really ought to.  You can watch it live at 8:00 central time or you can view any of the previous shows by going to the web site.) Before the interview was completed, I sent Vandersteel an email stating that if LTCOL Lohmeier didn’t already know it, his military career was over.  What did he talk about?  How the atmosphere of Marxism has crept into military organizations.  Surprise!!!  I have known this for decades, not that I am bragging.  I tell you this more out of my personal disgust that it would take the courageous actions by one active duty member of the U. S. Space Force to stand up and be counted.  I don’t know the LTCOL but I am guessing he knew exactly what was about to happen to him.  https://www.cbsnews.com/news/space-force-officer-matthew-lohmeier-removed-podcast-comments/  He was relieved of his command!

He was relieved not because of the Vandersteel interview but rather an interview he conducted with Sean Hannity during the Sean Hannity Show on FOX News.  I don’t think the interviews had anything to do with his removal from his command, the publishing of his self-published book, Irresistible Revolution; Marxism’s Goal of Conquest & the Unmaking of the American Military, did! 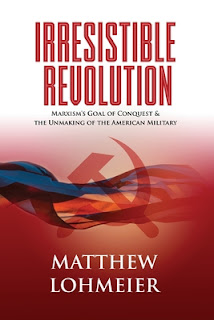 I write this Nugget having served for twenty years in the U. S. Coast Guard and yes, the U. S. Coast Guard IS a branch of the U. S. Military Uniformed Services.  The military is the military and while we wore different uniforms and performed different missions when comparing one branch to another, the military remained the military.  By this I mean there were certain things you simply could not do.  Speaking out (or in this case writing out) against the military or going on a news program without specific permission to do so and speaking out just was NOT something you did, at least while still serving on active duty.  In fact, it was my understanding that if you desired to write a book, the book had to be pre-screened by the Department of Defense.  I could be wrong about this but I don’t think so.  It is my understanding that Lohmeier self-published his book.  I have not as yet read the book but I have ordered it and will post a review once I read it.

Back to the military.  There is a pecking order within the military.  There is also at least one law passed by Congress called the Hatch Act that put it in very simple terms, preventing active duty members from publicly engaging in political matters.  Personally, I was afraid to even put a political sign in my yard for two reasons, first I worked for the U. S. Coast Guard, second and even more importantly, my wife worked for the Internal Revenue Service which to some degree had even stricter rules and regulations regarding political activity and comments than the military did.

During my 20  years in the service, I was fortunate to serve as an enlisted person through the rank of Chief Petty Officer, then was I promoted to the officer corps when promoted to Chief Warrant Officer and eventually was promoted to what was referred to as a Limited Duty Officer (LDO) Lieutenant.  Therefore, I feel like I have experience at most levels or at least have seen enough to experience the inner politics of a military career from all angles and thus feel comfortable commenting on it.  For the record, POLITICS DOES EXIST WITHIN THE MILTIARY and to suggest otherwise is simply moronic.  A person can no longer be apolitical than he or she can be a space alien unless of course they actually are one.  People hold political beliefs but within the military confines, you are not permitted to espouse those beliefs to anyone, ever!  Anyone who believes that actually happens is a fool.  I can assure you that as you sit sharing a beer after work, you talk politics!  PERIOD! Everyone does it and everyone knows it, you just don’t go on national or even local news shows to do it nor do you write books.

If you did to go on a national news program to discuss your beliefs or if you did publish a book such as Lohmeier’s book, you AND Lohmeier had to KNOW with certainty that the persons for whom you worked for within the chain of command were NOT going to let it stand without punishing you in one form or another.  What could they do?  Let me count the ways:

Lohmeier has already become a lightening rod within the miltiary, no one will want to be near him.  A lot of people will silently support him but few if any who remain on active duty will back him.  That is just the way it is.  No one wants to put their military career in harm’s way so they remain outwardly silent.  Lohmeier is alone on an island at this point.  I’ll say it again, he had to know this was going to happen.  I have heard some of the “talking heads” on televison suggest that he did what he did to sell his book.  That may be true.  Even though I do not know LTCOL Lohmeier, I think I know what he is doing.  He is blowing the whistle on the military and the military structure.

He is right about the infiltration of Marxism within the U. S. Military, in fact, it was inevitable.  Where do our military leaders come from?  They initially are products of our nation-wide educational system.  “Well I’ll be!”  Gomer said when hit with the obvious.  If we have been teaching our young children the ways of Karl Marx either covertly or overtly, it should be obvious that when our young children advance through our educational system, some will eventually filter into the U. S. Military.  Some will enlist as I did.  Others will go on to college and enter the military through collegiate Reserve Officer Training Corps and become commissioned officers upon graduation.  Still others will go from high school into one of the several Military Academies.  But all will do so with considerable Marxist indoctrination already included in their education in grades K-12.

Whether they attend college or an academy, their education continues.  I cannot address what someone is taught within the miltiary academies since I have not attended one.  I did attend college and I can personnally attest that even back in the 60s, some of my professers, even then, had obvious left leaning teachings.  That was one of the many reasons as to why I felt like I never fit into the college environment.  In 1965 I made two great life changing decisions.  First I dropped out of college or as I like to think, I STOPPED college, I was going nowhere.  Second, I joined the Coast Guard and that was a very good decision on my part.  Luck had a lot to do with me even being able to join the Coast Guard in 1965 during the height of the Vietnam War, but I’ll take whatever I can get.

My education took a turn when I read the book, The Naked Communist; Exposing Communism and Restoring Freedom written in 1958 by W. Cleon Skousen.  I read it in the late 1990s.  From the moment I read this book, I began to sound the alarm to whomever would listen.  The Communist Party USA had established 45 very specific goals (objectives) that if accomplished WOULD result in a PEACEFUL conversion of a Capitalist America to a Socialist (Marxist) (Communist) America WITHOUT a shot being fired.  If you want to read about the 45 goals and I hope you do, you can read them all by going to:  http://www.rense.com/general32/americ.htm

I wrote about them, I repeatedly posted them on all of the social media pages.  I made graphics and posted them such as this one regarding the takeover of our educational system: 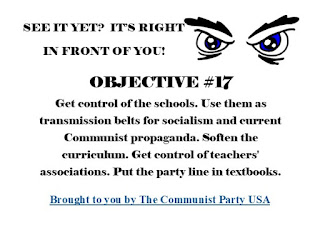 They have gained control over our schools and more importantly our teacher’s unions.  Why would our military academies be exempt from this takeover?  They probably haven’t been.  Again, I did not attend so I do not have first hand knowledge regarding what is and what is not being taught in our academies.  But, by extension, most of the teachers in our military academies progressed through the same educational system that their students have and on that count I can rest assured that they all have been indoctrinated in Marxist teachings in our schools, ALL OF THEM!

Therefore, using simply logic, I belive LTCOL Lohmeier is probably correct in his assessment and I can’t wait to read his book.  Unlike the people who have releived him of his command, and without actually knowing Lohmeier, he has become my hero.  It is not easy to speak out when no one really wants to hear what you have to say even when what you have to say is right; especially when you are right!  Being right makes everyone else who thinks contrary to you, wrong!  No one wants to be shown or proven to be wrong including Lohmeier’s officers who relieved him.

This is NOT the last time you will hear the name, LTCOL MATTHEW LOHMEIER!  Mark my words!  He is a man on a mission!

Posted by Jim "Gymbeaux" Brown at 9:59 AM No comments: