With All Due REspect

WITH ALL DUE RESPECT:

In my opinion, when people see who wrote this book and that she is a Republican and if they are left of center on the political spectrum, they will determine it to be not worth reading.  That would definitely be their loss.  This is a great book for everyone to read IF they want to read about a strong and principled woman who rose to be the United Nation Ambassador for the United States.  She is a woman in what typically is described as a “man’s world” yet she not only survived she thrived and America is better for her work not only at the United Nations but also as Governor for the State of South Carolina.

As I read the book, I thought about my three daughters and one son and how they may have benefited by reading Haley’s book when they were teenagers.  The one statement that stands out far more than any other in the book was when she described being the American born daughter of a mother and father who both immigrated to America from India.  She was “not white enough to be welcomed by white groups, and she was not black enough to be welcomed by black groups.”  She said she could have let that deter her but instead she moved on.  That is a lesson for everyone regardless of your ethnic heritage or your skin color.

I particularly enjoyed reading about how she rarely if ever took “no” for an answer.  That she fought the status quo and in spite of tremendous odds managed to convince others to do the right things at the appropriate times.  It also depicts the world as it really is rather than what we may think it is or what we see on television.  Many of her experiences are truly shocking as she describes them. I fully realize this is one person’s view of the time she spent as Governor and then as Ambassador yet as I read it, the truth seemed to shine through.  This is a good book and one that every teenager should read and learn from in their early years as there are valuable lessons throughout the book.  Adults could also learn from the book as it provides a window into the operation of a state government, the United Nations and the White House.

Who should read this book?  Everyone interested in improving their position in life and everyone interested in current events and politics!  It’s that good!
Would I read it again?  Probably not, it is not one of those books you need to read more than once.
Would I give it as a gift?  I definitely would!

Posted by Jim "Gymbeaux" Brown at 2:45 PM No comments:

Sam Houston and the Alamo Avengers:

Anyone my age grew up in the 50s and we all were well aware of the story of The Alamo, Davy Crocket, Jim Bowie and its many heroes.  What I did not know was the history of incidents leading up to the Alamo and then following the defeat at the Alamo that all resulted in Texas winning its independence from Mexico.  What I also didn’t realize until I read the book was that there were at least TWO Revolutionary Wars in America with the second being in Texas BEFORE it became part of America.  Even so it was a Revolutionary War that was fought primarily by Americans from all parts of the south, east and north.

I have read other books written by Brian Kilmeade and found them all to be very well written, well researched and held my interest and this book is no different.  It is a history book, no doubt.  It is also to some degree a graphic depiction of what happened at not only the Alamo in San Antonio but also the city of Goliad, Texas and the subsequent battle that lasted just 18 minutes that defeated the professional Mexican army led by Santa Anna.  It is also a complementation of letters, discussions and speeches that redirected the birth of a nation – Texas.  One of the things I was unaware of was the incivility demonstrated by El Presedente Santa Anna when it came to the outright murder of Americans taken prisoner during the war for independence.

This is the story of a great many American heroes the least of which was Sam Houston and the politics involved at that time in the history of Texas.  It is a book that I really could not put down.  Some books take days, weeks and even months to read and digest; not this one!  It is a great read that I highly recommend everyone read.

Who should read this book?  I would recommend it to everyone!  It’s that good!
Would I read it again?  I doubt I would read it again but I would certainly look up references contained in the book.
Would I give it as a gift?  I definitely would!

Posted by Jim "Gymbeaux" Brown at 3:44 PM No comments:

SHOULD BE TAUGHT IN ALL OF OUR SCHOOLS!


28 Ideas That Are Changing The World
By W. Cleon Skousen
A Book Review by Jim “Gymbeaux” Brown, November 7, 2019
Reader Note:  Words appearing in BLUE mean they are links to web sites 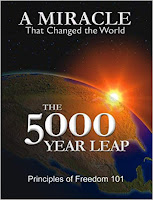 Disclaimer:  This is the oath I took while serving in the U. S. Coast Guard.  Take note, there is NO EXPIRATION DATE on the oath.

I, James R. Brown, do solemnly swear that I will support and defend the Constitution of the United States against all enemies, foreign and domestic; that I will bear true faith and allegiance to the same; that I take this obligation freely, without any mental reservation or purpose of evasion; and that I will well and faithfully discharge the duties of the office on which I am about to enter. So help me God.

I include the above to make is absolutely clear that as I read and subsequently reviewed this book that I most likely had a biased for America and its Constitution.  Having said that…

This book gets into the minds and purposes of the men who are considered our Founding Fathers and why they did what they did and wrote what they wrote regarding the U. S. Constitution.  It literally goes back 5000 years in time to draw from the ideas of people such as Aristotle to formulate their ideas as well as many others throughout history.  They took the best ideas and the successful and unsuccessful historical endeavors and created our Constitution, thus the title of the book. I found this book extremely fascinating.  I keep putting myself in the shoes of the Founding Fathers as they took parts of world history and molded those thoughts and principles into our Constitution.

It would be impossible to read this book without learning a great insight into how America got to where it is today.  Sadly, the information I read defines an America that I personally don’t see today.  This is NOT just my opinion; it is the opinion of a great many of the Founders who more or less predicted that America “could” change if the Constitution were ever changed or its contents were ignored for any reason.

This is an excerpt from the book worthy of re-printing here.  It is a prophecy!

One of the greatest American historians of the last generation was John Fiske. He caught the spirit of the Founders and studied their writings. He knew the secret to the 5,000-year leap which was then well on its way. He also saw some dangerous trends away from the Founders’ basic formula of sound government. He therefore wrote a prophecy which Americans of our own day might ponder with profit:

“If the day should ever arrive (which God forbid!) when the people of the different parts of our country shall allow their local affairs to be administered by prefects sent from Washington, and when the self-government of the states shall have been so far lost as that of the departments of France, or even so closely limited as that of the counties of England—on that day the political career of the American people will have been robbed of its most interesting and valuable features, and the usefulness of this nation will be lamentably impaired.”
Written by John Fiske, The Critical Period of American History, 1783-1789, The Historical Writings of John Fiske, Vol 12, Houghton Mifflin Company Boston, 1916, pp 282-283

Five Thousand Year Leap; a book that SHOULD be taught in every school in America if not the world. It explains the thinking that gave us our current form of government and why we should all be working to make sure it remains in tack. The handwriting is on the wall!

I started this Nugget with the Oath I took in the Coast Guard for a very good reason.  Over the years I have read the U. S. Constitution and thought I had a pretty good understanding of it.  After reading this book I realized just how wrong that understanding actually was.  We as a nation of strayed considerably from the ideals put forth by our Founders and that is a pity.  Not sure we can ever recover those ideals without first changing a great many minds.  THIS IS A GREAT BOOK!

Who should read this book?  Actually, everyone but I know many won’t even consider it.  IT SHOULD BE TAUGHT IN ALL OF OUR SCHOOLS!  But it won’t!
Would I read it again?  Actually, I will.  Any chapter can be read without a need to have read previous chapters and that makes it both easy to read and instructional now and in the future.
Would I give it as a gift?  I would love to but won’t as it really counts on a person’s desire to learn the history of our great country.