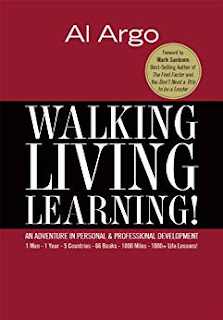 Definition:
CliffsNotes (formerly Cliffs Notes, originally Cliff's Notes and often, erroneously, CliffNotes) are a series of student study guides. The guides present and create literary and other works in pamphlet form or online. Detractors of the study guides claim they let students bypass reading the assigned literature.  (Note by me, the Detractors were right.  I can honestly say and contrary to what most of the students around me were doing, that I used the Cliffs Notes only once and it involved something written by Shakespere.  I could not get into the book of which I had no interest and the Cliffs Notes on the book was the ONLY way I could get through it.)

If this is a book review, why do I begin the report with a definition of CliffsNotes?  The book IS a form of Cliff’s Notes on some of the most famous and beneficial books anyone could read regarding sales, leadership, motivation, goal setting, resolving conflicts, etc. etc.  I am sure you have seen the posts on LikedIn and Facebook that provides a quote used by an author.  You can find such worthy quotes on every page of this book, EVERY PAGE!  In my opinion, it would be impossible NOT to learn something discussed on every page that could/should enhance your attitude and your future.  If that is the case and I believe it is, why would you not want to read this gem?

Al Argo begins his book with an explanation as to why everyone should make it a habit of walking for exercise and for good long term health.  There can be little argument with that premise.  Then the book gets really interesting when Argo talks about listening to books while he walks that he did for one hour a day, EVERY DAY, FOR A YEAR!  The book covers a year of his walking and he provides the critical elements of each of the books he listened to while walking.  That makes it a form of CliffsNotes where you are provided with “the meat” of a book without reading the entire book referenced.  I must provide this disclaimer that everyone should read.  What should people read?  You can obviously read fiction but in most cases, I find reading fiction is a case of using your time for enjoyment as compared to reading to learn and improve.  The books discussed in this book are books designed to learn and improve.

I was shocked at how many of the books Argo references that I have also read.  That is either a coincidence or I have selected some really good books to read as confirmed by the author’s choice to read them as well.  It also gives me a great list of books that I can still read.  Great minds…..

Here us a list of books discussed in Walking, Living, Learning!  By Al Argo   When possible they appear in BLUE meaning you can click on a link that will take you to a location for more information.

Posted by Jim "Gymbeaux" Brown at 2:04 PM No comments:

You may not like it but you should read it

Unmasked is disgusting, remarkable, informative, revealing and enlightening all at the same time.  I challenge everyone to FIRST put your political opinions aside and then read just Chapter 1 with an Open Mind.  This will be an impossible task for a great many people and to those people I would suggest you don’t even try to read the book.  Chapter 1 clearly demonstrates with factual quotes by noted so called journalists as to how deep their personal hatred for President Trump goes and what they will say and do to try to change the minds of the people who watch their television coverage and/or read their books, articles and Op-Eds.    To many who do read Chapter 1 they will unfortunately find no fault assessed to these journalists because they, the readers, represent the same beliefs as the journalists.  I ask everyone to replace Trump with a presidential candidate of your choice and one you would vote for. Then consider an extremely biased news media going AFTER YOUR candidate of choice. I used the word AFTER for good reason; the truth does not matter to them.  How would you feel and what would you believe should that happen to YOUR candidate?  You would not like it nor accept it.

SURPRISE!  If you are like me, we both have been very wrong in what we have believed “journalism” to be.  Here is how journalism is defined on the Internet/Dictionary:

Journalism refers to the production and distribution of reports on recent events. The word journalism applies to the occupation, as well as citizen journalists using methods of gathering information and using literary techniques.

Notice anything strange about that definition?  If you are like me, it is not what we have believed to be true about journalism?  There is no mention of TRUTH or UNBIASED REPORTING – NONE!  There is no mention of the “reports” being FACTUAL.  There is no reference to FACTUAL reporting on “recent events” at all!  Who knew?  I certainly didn’t.  I grew up thinking journalist pursued the truth about what has happened.  It has long since morphed into journalists predicting what is ABOUT to happen oftentimes as much as they report on what HAS happened if not more so.

The Book…I found it to be well written and well documented.  It made its point regarding today’s journalists specifically and journalism in general.  For the record, I STOPPED watching the news because I recognized the one sidedness of journalist almost a year ago.  I could not help but notice it long before that but it was about a year ago I made the decision NOT to watch them ever again or at least until they have changed to reporting FACTS instead of OPINIONS.  They have become news commentators; not news reporters.  This book clearly points out just how one sided the news media and Hollywood have become.  They will say and do anything to advance their personal agendas the facts be damned.

Normally I would recommend everyone read a book like this but it would be a waste of time.  Anyone left of the center on the political spectrum will NOT read this book and I am positive they will criticize its contents even though they have not read it because they “know” what it says and consider it to be all lies.  Ignore the facts if you like but politics is funny; what goes around comes around.  Those who believe the media and Hollywood are doing a good job because they have both openly taken your side will one day be on the other side of that equation.  The media and Hollywood HAVE become the number one enemy of democracy in my opinion.

In 1958 The Communist Party USA, realizing that they would never militarily take over America, devised 45 specific objectives that would in their opinion lead to a peaceful takeover of America.  The following are just a couple of those objectives and why I wish everyone would read this book.  If YOU are one who chooses to ignore the obvious and the facts, you have become what Marx and Lenin described as their “useful idiots” who unwittingly do their calling without even knowing it.

#15.    Capture one or both of the political parties
#20.  Infiltrate the press. Get control of book-review assignments, editorial writing, policy-making positions.
#21.   Gain control of key positions in radio, TV, and motion pictures.

You can read them all by going to  http://www.rense.com/general32/americ.htm

Would I read the book again?  No, there would be no need unless I was looking for a specific reference.
Would I recommend the book to others?  Absolutely
Would I give the book as a gift?  Probably not because it is unlikely most people would read it

Posted by Jim "Gymbeaux" Brown at 1:33 PM No comments: