Did You Ring The Cash Register Today?

DID YOU RING THE CASH REGISTER TODAY?


Written by Jim “Gymbeaux” Brown, March 5, 2020
Anything appearing in BLUE is a link to a web site 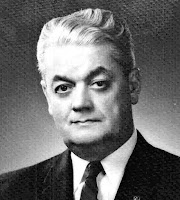 The photo?  That is my uncle on my Dad’s side of the family, George Whitman Brown 1905-1972.  He was a bachelor his entire life not that it has anything to do with anything.  A Pharmacist who eventually opened his own Brown’s Drug Store in the days before the big chains.  He then opened another, and another until he ultimately owned five drug stores throughout the Youngstown, Ohio area.  His home store and office were across town from where we lived but he had one store established about a half mile from our home.  It was there I had my first taste of employment when at the age of 12 I started working there as a stock boy.

My duties were as the title would suggest.  I stocked and restocked the shelves.  I also learned to work the soda counter where I made the World’s Best Milk Shakes, Sundays and Sodas all from real ice cream.  I also rang up sales.  One of my duties was to remove all the outdated magazines from the shelves and take them to the basement to wait to be picked up by the magazine sales person.  That was my first introduction to Playboy magazine which was quite an education for a youngster at the age of 12 in 1957.  I also learned how to make capsules for the Pharmacist, count out pills, make labels for the prescription bottles.  Another of my duties was to wrap boxes in plain brown paper.  What I wrapped were Kotex boxes and then using a magic marker I would write KR or KS for Kotex Regular or Kotex Super.  Why were the boxes wrapped?  To avoid any embarrassment by both men and women who would buy them so no one knew what they were taking out of the store as if no one knew; everyone knew.

On one Christmas Eve my uncle came to our home where alcohol was served and he had a drink or two.  He said he was going to lie down for a while.  He would then call me to “bring him another one.”  To this day I believe it was an act for my sake.  From that day, however, I started to refer to him as Uncle Booze.  The name stuck beyond belief.  Everyone called him Uncle Booze.  In some of his circles that may not have been very good for him.  He served on the Youngstown City Board of Education.  He did a lot of civic activities and while I am not positive, I believe at one point he served as Lieutenant Governor for the State of Ohio but I could be wrong on that one. 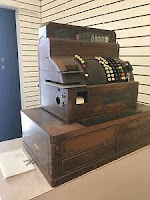 What made me think of this at this time in my life?  Glad you asked.  I am reading Charlie Kirk’s new book, The MEGA Doctrine.  About Chapter 4 I realized that President Donald Trump lives by the question “did I ring the cash register today?”  I have experienced Presidents since Dwight D. Eisenhower.  As a 6-year old, he was definitely my hero.  Yet in all honesty, looking back at the ELEVEN Presidents I have come to know, I can’t say that any of them can measure up to President Trump’s desire to learn something new; to read something of value; to meet people other Presidents chose not to deal with like the leaders of North Korea, China and even Iran; to make a difference in someone’s life; to help someone in need; to resolve a nasty and lingering problem; TODAY!  Or in the words of Uncle Booze who also happened to be a businessman, did he “ring the cash register today?”  In my opinion and in spite of what the national news media reports and the opposition says, yes, yes he has rung the cash register every day he has been President.

There is a simple test that most people left of center and even some right of center are ignoring.  Are you better off today than you were just three years ago?  If people were honest it would be a resounding YES!  But that is not what you hear on the news or in the halls of Congress or now on the campaign trail.  Politics has become a truly ugly word, at least to me.  You?  People in the opposition party can do no right no matter how good the things they may have done are.  It just doesn’t make any sense.  If someone does good, they should be praised.  If they do poorly, they should be criticized or even punished.

The following is taken from Charlie Kirk’s book, The MEGA Doctrine.  They are examples of President Trump “ringing the cash register” and getting very little credit for the results from the national news media or the opposition party.  Read them.  You decide if he has rung the cash register for America; for you:

Note:  I added the Cha-Ching for emphasis!
Kirk asks the question, what if Hillary Clinton had won instead of Donald Trump and Hillary Clinton had done all of these things listed or even half of these things; how would she be perceived by the national news media and the opposition party.  As Kirk suggests, she would be idolized; schools, parks and bridges named after her and statues erected.  She would have “rung the cash register.”  But since it was Trump and hot Clinton who did all these great things, he is vilified by the national news media and opposition.  It is truly a sad state of affairs in America when your only concern is preserving your own power by retaining your own office and other political offices such as the White House for your particular political party.

For the record, I am very proud to be an American.  I am proud of America.  I am proud of President Trump even thought I initially reluctantly voted for him.  I was obviously wrong in my initial opinion and I am not afraid to say it.  Of the ELEVEN Presidencies I have personally lived through President Trump is far and away the best at providing for the well being of America and should be so recognized.

No President has ever rung the cash register as often and as successful as President Trump.  I salute you sir!  Cha-Ching!