Can The World Absorb A World Changing
Scientific Discovery?
By Jim “Gymbeaux” Brown, July 24, 2018
NOTE:  Anything in BLUE and underlined is a searchable link

Before you answer, keep in mind the thousands upon thousands if not millions of people who currently work in building the gasoline engine and supporting companies.  Think about the millions of people around the world exploring for oil and gas products to power them. Think about the mechanics that service them. Think about the thousands of lobbiests in places like Washington DC whose jobs were created to protect the industries that support the mainstay of the automobile world – the gasoline engine.  Do you still think that such an invention would ever see the light of day until such time as gas and oil saw a very significant shortage and no longer readily available?

Money drives almost everything.  If someone WERE to invent an alternative to the gasoline engine, the first thing that would happen is that the “powers to be” would be trying to purchase the idea to make certain it is buried before anyone became aware of it.  The second thing that would happen should the first not work would be to physically threaten the inventor of such a world changing discovery.  Failing these two steps, people have disappeared for much less when you consider the amount of money involved in maintaining the gasoline engine.

I don’t know if someone has invented an alternative to the internal combustion engine or not; we may never know.  But I do know that someone has invented an alternative to coal fired and gas fired energy plants and nuclear reactors all of which provide our current energy needs.  Shockingly this technology has been around since 1965 or earlier.  It is called The Thorium Reactor. 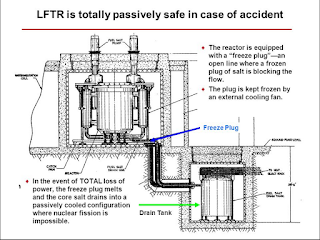 Before you understand why this is a very important discovery you first need to know about Thorium and why it is critical to understanding the “rest of the story” as Paul Harvey would say at the end of each radio broadcast.

Thorium is one of the many elements that we find on Earth and on other planets and asteroids but especially our moon.  That is the extent of my knowledge of Thorium.  I would not be able to identify it if it were sitting next to me on my desk and who knows, maybe it is.

But I can read and I can watch videos and because of these two things, I know that if any country were to plan and build a Lunar Manned Space Station on OUR moon or possibly on Mars, the need for a reliable energy source would be the number one concern.  If what I have read and watched is true and there is no reason for it not to be true, such a Lunar Space Station would be powered by a Thorium Reactor.  Why?  Because the element Thorium is readily available on the Moon as it is on Earth and most likely on Mars as well, it is safe and it has very valuable side benefits.  In fact, Thorium is probably in your back yard as I write this.

Consider this.  It would take a very small amount of Thorium to power the city of San Antonio Texas for an entire year.  Some of the links below will demonstrate how the use of a Thorium Reactor provides clean drinking water and medical isotopes.  What is a medical isotope?  This from the Internet:  A medical isotope is a safe radioactive substance used primarily to diagnose illness. The energy emitted by the isotope when inside a patient is detected by special cameras while the patient is being scanned. ... The branch of medicine and medical imaging that uses these isotopes is known as nuclear medicine.

Safe energy, abundant supply of Thorium, clean drinking water that provides medical isotopes all at the same time, can it get any better than this?

This technology was developed in 1965 as stated above.  Why has it been sitting on a U. S. Government shelf somewhere deep within the bowels of our government?  One explanation is that the Cold War with the Soviet Union was front and center in the mid 1960s and the building of Nuclear Weapons was paramount to the thinking of the government.  Nuclear Weapons could NOT be built using Thorium therefore Uranium Nuclear Reactors and Energy was the energy of choice and the Thorium Reactor was shelved and forgotten.  But was it really forgotten or was it shelved in favor of existing energy sources so entrenched in our commercial world?  The introduction of a Thorium Reactor would significantly upset that balance by putting a lot of people out of work.

That is my opinion, not the opinion of anyone else that I am aware of but it certainly makes sense at least to me.  Want an example?  We know that cigarette smoking causes all types of cancers and serious if not terminal medical issues. Still, no government that I am aware of will ever ban the use of cigarettes; just look at America.  Yes people have been gradually weaned from tobacco products but they have not been banned EVEN when everyone knows how dangerous and deadly they are.  Instead there is now a movement to ban plastic straws.  More people die from tobacco related products than from murders cause by weapons (or plastic straws) yet millions of people will march in support of more gun controls; why not the elimination of tobacco products?  The answer is JOBS!

The reason for this Nugget is simple.  The more people that become aware of the possibility of Thorium Reactors and how safe they are, how abundant Thorium is and the related by-products, the less likely it will be that our government will continue to bury this technology.  Here are several links.  Watch them, read them, and/or listen to them.  Then you decide if the technology would be worth further development and world changing. Think about third-world countries (hate that term) where they rely upon cow dung to heat their homes and cook their food.  If you agree, write to your members of Congress.  They may or may not even be aware of this technology.  My guess is that most if not all are unaware except for my members of Congress who I have written to about the subject.  So far no response other than a canned thank you letter.


If you want to read a fascinating book about Thorium Reactors and a Lunar Space Station (that we all know will eventually happen), read Dennis Lusk’s book, A New Paradigm for Humanity.  You can learn more about the book by clicking on the title of the book in blue.

DISCLAIMER:  I am not a scientist and a lot of what I read is completely over my head.  But I understand the basic principle of the Thorium Reactor; just don’t ask me any really technical questions.
Posted by Jim "Gymbeaux" Brown at 8:17 AM